You are here: Home / The Journey

The SB 1090 Journey: What has been happening and why SB1090 is the only reasonable solution

During the Encinitas Beacon’s Beach “Locals vs Surfrider Skybridge” dispute1View Article community speakers made it clear to the City Council and Planning Commission that terminating the long-term bluff erosion management plan in favor of the ad hoc Surfrider sponsored plan, that deliberately prohibited mitigation of eroding bluffs (whether private or public), would be dangerous to the beach going public. 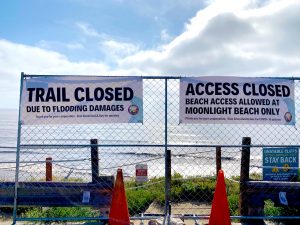 Sadly, soon after the Beacons dispute ended, the Davis family was killed by an un-mitigated bluff failure (or “managed retreat in action”) just a mile North of Beacons. And presently Beacons public access is shut down due to neglect from a rainstorm driven “natural erosion”.

My daughter and I witnessed the frantic digging to try to save the trapped Davis family members. I cannot erase that experience for either one of us, and I made a promise then and there to her that these very addressable hazards shall be directly addressed.

The current coastal management strategy does not prioritize erosion mitigation, instead it is deliberately enabling bluff slides, failures, erosion, and collapses that will continue to kill people on our beaches and block public access. The goal is to create hazards with the hope of condemning public and private structures in order to “re-wild the coast” in urban areas. This approach is not in line with the intent of the California Coastal Act of 1976. This is a reckless strategy to deploy in highly populated areas and is being championed by elected officials and the Surfrider Foundation because there is so much cash, legal fees, and political influence behind it.

The Surfrider Foundation today more closely mirrors a front for Spectre than a grass roots surfer advocacy organization. In fact, it is a handful of elite donors that provide the vast majority of their revenue and do so on a fully tax deductable basis. Thus the actual drivers of our local coastal policy are in fact the beneficiaries of the HP family fortune (Packards), the Intel family fortune (Moores), Morgan Stanley Global (a too big to fail investment bank), Anonymous Foundation (foundation that hides the donor identities), Leonardo DiCapro Foundation (he is busy though – building a massive luxury resort development on a previously uninhabited tropical island off Belize), etc.

We as a community, cannot allow another senseless death (or “collateral damage”). No more beautiful people shall be sacrificed at the altar of managed retreat, extreme re-wilding ideology, or to any other group or politician who relishes projecting raw power over our beaches.

The total failure of state and local governments to provide sand replenishment forces the unsuspecting public to set up close to the base of dangerous sections of the bluffs. Being forced to sit in a kill zone is not the kind of public access the Coastal Act had envisioned.

There are many forces driving coastal bluff erosion: rain, ground water seepage, clay formation with a water/soil top layer, vegetation, and wave action at the base. Yet, the current policy is an iron clad prohibition of any early stage mitigation, no matter what the cost.

You can try to challenge the establishment, but those efforts are met with an onslaught of lawsuits, sanctions, fines, threats, and legal defeats—dragged out over many years by the CA Coastal Commission, and the Surfrider Foundation.

So when there is a big slide and people are crushed to death (or not) the City of Encinitas just puts up yellow caution tape after the fact. Or if a structure is endangered by a major failure a massive seawall goes up via an emergency permit process. Further adding insult to injury, lifeguards are directed to proactively photograph the bluffs, but not to monitor beach safety. They use that information to report on homeowners (who are trying to mitigate erosion as best they can on their own property) to the Coastal Commission–akin to instructing the fire department to prevent brush clearing in a fire zone.

By looking at a cross section of the Leucadia bluffs, it is clear that they are composed of vertical clay slabs that are a few inches to a few feet thick and are stacked West to East like a granite countertop slab display; with a water soil interface layer at the top. Rain and groundwater flows saturate steep sections leading to slides or blowouts (like the recent ones between Beacons and Grandview) or can even precipitate the drop of a child crushing chunk of clay onto the beach from a vertical face without warning.

These types hazards have nothing to do with sea level rise and exist inland as well – but inland formations such as these have very strict state and local requirements for drainage, irrigation, vegetation, and retaining walls.  An ounce of expert driven preventive maintenance goes a very long way to mitigate the need for large emergency seawalls.

Alternatively, wave action at the bluff base from combinations of naturally occurring king high tides, large swells and/or storm surge erode the base and over many years erode it to the point caves are created (that kids love to play in) or can entirely remove the support base for a slab. Note extreme events such as these do not happen often and during the vast majority of each month the water level is not reaching the bluff base at all. Thus the difference between a regular retaining wall and bonafide seawall vary greatly by location.

In the case of the Davis family tragedy a mid-face slab slapped down onto the beach because of the obvious unmitigated base erosion over many years. Just a few yards South at the legacy (barely noticeable) Grandview staircase retaining wall nothing happened because the base was supported; and this of course is where the City places the lifeguard towers.

A simple, small supportive toe at the base of the vertical face near Grandview would have prevented the Davis tragedy. Over the 2 mile stretch between Stone Steps and Grandview over 700,000 people visit those beaches each year – equivalent to 18 times the full capacity of Petco Park. The math says we have been very lucky thus far with “only” ~ seven fatalities.

Seeing that the Encinitas City Hall and The Scripps Institute of Oceanography both sit on sites totally surrounded by retaining walls/seawalls and the recently erected Encinitas Marine Safety Center (at waters edge on Moonlight Beach) is fortified it with rip rap and cement—proves that we all know these approaches actually do work.

In fact, the small toes between Beacons and Stone Steps have been there for many decades, saved lives and have mitigated the need for massive emergency seawalls.

Thus in cooperation with Dr. Davis and Senator Bates, SB1090 Legislation was created because nothing has been done to address these hazards. SB-1090 provides our community with the opportunity to begin to proactively mitigate erosion, dramatically increase public safety, and greatly reduce the need for massive emergency sea walls.

We all grew up surfing in CA and greatly appreciate the natural beauty of the coast and took great pains to respect the intent of the California Coastal Act of 1976. This bill is limited to southern CA hazard zones and it is specifically NOT applicable to new development. SB1090 allows the responsible party for any coastal parcel (public or private) to remove hazardous vegetation, install/repair drainage, install/repair retaining walls, notch infills and seawalls through a clear permitting process with sand mitigation fees and the use of only CA CC compliant species, materials, and engineering.

SB-1090 will make our beaches safer for everyone, will not utilize any taxpayer funds, and requires a $25,000 per permit sand replenishment tax. Please sign our petition, contact your elected officials, and spread the message.

We can’t bubble wrap the beach experience but to purposely do nothing is unacceptable. The current policy guarantees more people will be killed on our beaches – it is just a matter of how high the body count needs to get before common sense prevails over extremely callous ideologs.

Any cookies that may not be particularly necessary for the website to function and is used specifically to collect user personal data via analytics, ads, other embedded contents are termed as non-necessary cookies. It is mandatory to procure user consent prior to running these cookies on your website.